Skip to content
Casting is a manufacturing process which is implemented since ancient times. Till now “casting” is the choice of many manufacturers as a method to manufacture various parts. Today let’s start by defining “casting” 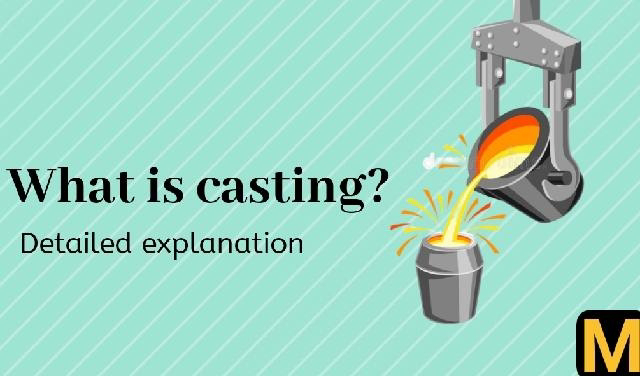 Casting is the manufacturing process in which molten metal is poured into moulds of desired shapes to produce different parts from it upon solidification.

The general process of casting is as follows :

The moulded part or component which is removed upon solidification from the mould is called as Casting. The factory or the workshop which manufactures castings is called as a “Foundry“.

In industry there are mainly two types of foundry:

The casting process starts with the pattern making. Let’s see in detail what are casting pattern ?

The casting process starts with pattern making. Patterns are used to make moulds for the casting into which the molten metal would be poured. Patterns are the replicas of the product which is intended to be casted. Pattern are little bigger in size as it includes all sorts of allowances. Some of the allowances are
Shrinkage allowance : As metals tend to shrink upon solidification, the pattern must be made little larger to make up for the shrinkage.
Machining allowance : Machining or finishing of the casting results in removal of metal, thus designers design the pattern in such a way that after all the machining processes the final product would be of the desired shape and size. Similarly there are many other allowances included in a pattern .

Materials used for making patterns are:

Now that the pattern is made, the pattern is used to make mould out of it. How ? let’s see. Out of all moulding process Sand-moulding is most widely used for casting. Sand moulds are “disposable” or “one-time use” moulds. After casting the sand mould is completely destroyed for removing the casting out of the mould. The sand is mixed with binders and additives along with water to increase the mouldability of the sand. For preparing the mould, the moulding material is contained around the pattern. As shown in the fig, the upper part of the mould is called as cope and the lower part is called as drag. The mould is allowed to harden and the pattern in removed from the mould only to expose the cavity thus created for pouring molten metal in it.Types of sand moulds are : 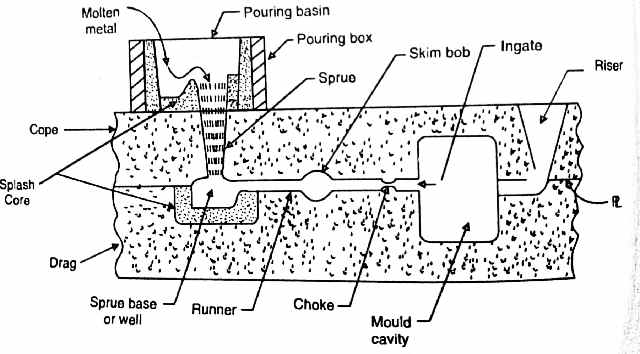 The mould contains the following elements for successful casting:

Core : Usually made from sand, wood or metal, the core is used for making holes into the casting. The core is a body which is placed in the mould cavity before closing th mould nd pouring the molten metal. Core thus helps to form a cavity inside the casting.
Pouring basin : It is the reservoir at the top of the sprue ( in the cope) that receives the steam of molten metal poured form the ladle.
Sprue : A sprue or down gate is vertical channel that connects the pouring basin with runners and gates. It is made somewhat tapered downward for ease of moulding and more importantly to have a decreasing cross-sectional area corresponding to the increase in velocity of the molten metal as it flows down the sprue hole. This prevents the turbulent flow and hence the drawing in of air along with the liquid into the mould cavity.
Sprue base or well : It is the reservoir at the bottom end of the sprue. It prevents excessive sand erosion when the molten metal strikes the runner at spruce base. Also, there is considerable loss of velocity in the well.
Runner : The runner is generally the horizontal channel whose functions are to trap slag and connect the sprue base with the gates, thus allowing the molten metal to enter the mould cavity.
Gates : The gates are the channels through which incoming metal directly enters the mould cavity.
Risers : The riser or feed heads are a part of the feeding system. These are reservoirs of the molten metal that feed the metal in the casting proper as it solidifies, to prevent shrinkage cavities in the casting. The drilling process is simple itself. Probably the most straightforward technique of subtractive machining (SM). But every expert engineer knows…

Today at the Mechanical post we’ll see What is electric discharge machining? its construction, working, applications, advantages, and limitations. You…

This is The Mechanical post! and today you would be reading about What is 3D printing? What are its types?…

Being a Mechanical engineer you must’ve come across the lathe machine or heard of it. This machine can be said…