Welcome back to The Mechanical post ! Today we’ll see what is hydroelectric power plant , its layout, its components, diagram, advantages and disadvantages. So let’s get started. 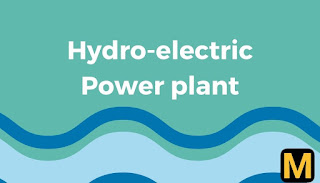 In current times pollution and global warming are increasing at an unprecedented rate. Thus, to curb and control them is the need of the hour. Generally, till now electricity was produced with the help of coal or oil fired steam power plants. These power stations used non renewable fuel to produce power, which caused emission of harmful gases.
However, hydroelectric power plant makes use of renewable energy. This is done by converting the potential energy of water into electrical energy. Thus producing almost zero emission, which is good for us as well as the environment. Now, let’s define hydroelectric power plant.

What is a hydroelectric power plant ?

Hydroelectric power plant is defined as “A type of power plant which converts the potential energy of water stored at a height into electrical energy with the help of turbines  and generators.”

The Hydroelectric Power Plant is made up of the following components: 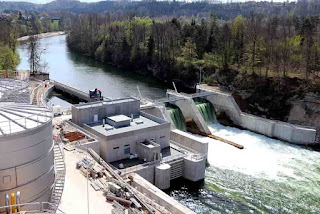 A surge tank is a small reservoir or tank fitted between the reservoir and the turbine. The water level in the surge tank rises or falls to reduce the water hammer effect in the penstock.

A penstock is a long steel pipe reinforced with concrete which delivers water from the reservoir to the turbine. The potential energy of the water stored in the dam is converted into kinetic energy as it flows down through the penstock due to the action of gravity.

The penstock is usually thicker than normal pipes  to bear the immense pressure exerted by the water. The penstock has a large diameter

The water turbine is a type of impeller which is coupled directly to an electric generator. Its main function is to convert the kinetic energy of the water into the rotary mechanical energy.

The generator is coupled to the same shaft on which the turbine is mounted on. The generator converts the rotary mechanical energy of the turbine into electrical energy. The produced electricity will be step up or step down  accordingly
with the help of transformer and later supplied to industries and domestic purpose.

The water after passing over the turbine is then discharged through the tailrace after which the water joins the river.

What is the working principle of hydroelectric power plant ?

The hydroelectric power plant works on the principle of converting the potential energy of the water into electrical energy with the help of various components like the penstock, turbine and the generator.

When the control valve is opened, the water from the dam enters the penstock and starts flowing towards the turbine under the influence of gravity. During this process the potential energy of the water is partly converted into kinetic energy.
Total conversion of potential energy into kinetic energy takes place in the nozzle. The surge tank protects the penstock from sudden pressure waves when the control valve is closed suddenly. Thus reducing the water hammer effect.

The  water coming out of the nozzle is directed onto the vanes (blades) of the turbine. This high velocity water jet exerts pressure onto the vanes, thus causing it to rotate. In this way the kinetic energy of the water is converted into mechanical energy.

The world’s largest dam and hydroelectric power station is the “Three Georges dam” and is situated in china. It has 34 generators each of which producing 700 MW power.
When the Three Gorges Dam was built, 39 trillion kilograms of water from the Yangtze River is stored up at a height of 175 meters above sea level.
According to a report, NASA has calculated that the dam only slows the rotation speed of the earth by 0.06 microseconds. Now that’s something interesting isn’t it ? do let me know in the comments about it.

The advantages of Hydroelectric Power Plant are :

The disadvantages of Hydroelectric Power Plant are:

The applications of Hydroelectric Power Plant are:

We’ll be back soon with another interesting article till then Keep learning and read The Mechanical post. What are boiler mounting and accessories? are both of them the same? If no, then what is the difference between…

This is The Mechanical post and today you will be reading in this article about: What is a nuclear power…

Welcome back to The Mechanical post! and today you will be reading about: What is a boiler? Working principle of…