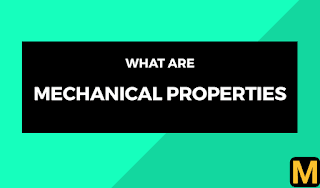 For this the engineer / designer must know the properties of each material he/she is using in the machine. Some materials are very strong and hard but on the other hand they are brittle like Cast iron. Lack of such information can result in wastage of resources. So let’s see what are mechanical properties in a material.

Elasticity is defined as the property of a material to come back to its original shape after deforming when external forces are removed.

Elastic limit is the maximum limit of a material can withstand without permanently deforming. A material is said to be elastic until it exceeds the elastic limit. After that the material starts to deform permanently i.e. it cannot regain its original shape.

Yield point of a material under stress is a point at which the strain in the material increases considerably without increase in stress.

Plasticity is the mechanical property of a material in which, when certain amount of  load is applied beyond the elastic limit it deforms permanently without any rupture or failure.

The property of the plasticity in a material allows us to give a desired permanent shape. Take for e.g. clay for making earthen pot, if this clay wasn’t plastic no matter how hard the potter would give shape to the pot it wouldn’t set. It is the plasticity in the clay which enables the potter to mould it in the desired shape.

QnA  1 : What are elastic and plastic materials?

Strength is defined as the property of a material to resist the externally applied load and stresses without breaking down or failing. The more the load a material can withstand the stronger is the material.

The maximum load or stress a material can withstand before failure is said to be its ultimate strength.

Did you know that Gold is so ductile that if you took only 1 gm of gold, a wire about 2 km long could be produced out of it.

Malleability is the property of a material to be flattened into thin sheets by applying compressive force such that it doesn’t crack or rupture under load.

Mostly ductile materials like gold, silver, mild steel, copper, aluminium are malleable.
The most common example of this is the aluminium foil. The foil is made up of very thin sheet of aluminium. This is due to the property of malleability.

Hardness is defined as the ability of a material to cut another material. A harder metal can always cut or dent materials softer than itself due to its hardness.

This property is very important especially when it comes to design of tools and machines. Tools are made to cut or remove material from the workpiece. Thus the tool material must be harder than the workpiece for efficient cutting.

A hard material also becomes difficult to scratch also making it resistant to wear and tear. Diamond is the hardest material found on this planet.

The hardness is usually expressed in numbers which are dependent on the method of making the test.
The hardness of a metal may be determined by the following tests:

Brittleness is the property of a material in which after a certain point under load the material breaks or fails without any elongation.

The materials which have less than 5% elongation under loading behavior are said to be brittle materials.

Toughness is defined as the ability of a material to absorb sudden impact without breaking or failing. A tough material absorbs the impact and deforms accordingly, however it is to be noted that it doesn’t break.

Let’s take an example of a car. If you were to take a hammer and give a blow onto the body of a car, you might end up with a dent, however if you took the same hammer and again gave a blow onto the windshield, the glass may shatter. Here the car body is said to be tough.

The toughness of the material decreases when temperature of the material increases. This property is desirable in machine components subjected to shock and impact loads like in a punching machine.

Due to repeated loads and stresses on the material, the material tends to deform permanently little by little, although the material is being loaded within its elastic limit. This deformation over time is known as Creep.

Due to repeated load and stresses the material fails below its yield point. This is known as fatigue. The repeated causes formation of microscopic cracks which eventually over a period of time cause the failure of the material.

QnA 2 : What is the difference between fatigue and creep?

It is the property of metals which decides how easily the material can be shaped and given desired form. The formability of a material depends upon the following factors

Castability is defined as the property of a material, which allows the material to be easily casted into various shapes and sizes.
Examples of castable materials are : Cast iron, aluminium, copper alloys, magnesium etc.

Just as castability, weldability is defined as the property of a metal which allows the metal to be weld properly and efficiently, either by melting the workpiece and then cooling it or by introducing a filler metal which melts and joins the two workpieces.

Thermal conductivity is defined as the property of a material to conduct heat energy through it. Silver, aluminium and copper are very good conductors of heat.

It is the property of a material to resist the flow of heat energy through it. These materials tend to burn instead of melting when exposed to high amounts of heat energy.
PVC, wood, rubber, paper etc are examples of non conducting materials.

Electrical resistance is the property of a material to restrict the flow of current through it. Such materials are called as insulators, for eg PVC, plastics, wood, rubber etc.

Electrical conductivity is the property of a material to allow the flow of current or electricity by offering very little resistance. Silver is said to be the best electrical conductor, however due to its high cost it is not used in electric cables. Other conducting materials include copper, aluminium, graphite etc.

Cast iron may be defined as “an alloy of iron and carbon containing more than 2% carbon”. The minimum carbon…

Gray cast iron, a type of cast iron most widely used for production of industrial components, has superior machinability to…