This is The Mechanical post and today you will be reading about What is vapour compression cycle? its construction, working, C.O.P, P-H & T-S diagrams and applications.

In the end, you can print or download the PDF on Vapour compression cycle by clicking the button provided. 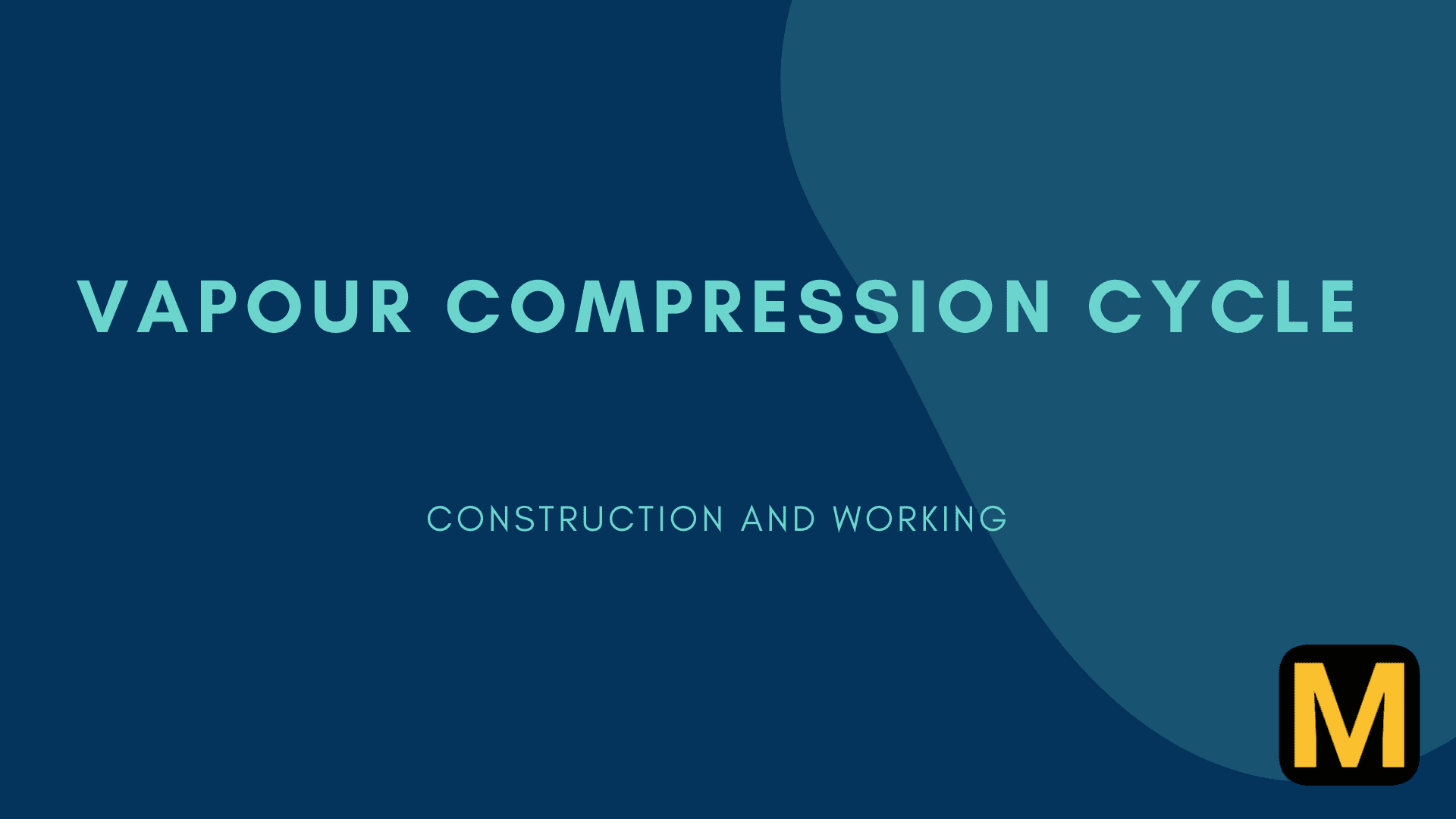 Before starting off, let’s get acquainted with what is refrigeration?

What is meant by refrigeration?

Refrigeration can be defined as, “lowering the temperature of an enclosed space by removing heat from it and transferring it elsewhere”. This is obtained by passing a cold liquid around the space to be cooled. The cold liquid absorbs heat from the nearby area resulting in cooling effect or refrigeration. This liquid used is known as a refrigerant.

Most of us use a refrigerator or an air conditioner on daily basis. Their function is to cool, or talking more specifically they are used to produce refrigeration effect.
Have you ever wondered how do they work? Most of the domestic refrigeration systems work on the vapour compression refrigeration cycle.
So now, let’s take a look at its construction and working.

The vapour compression cycle consists of four major components. These components are given below:

The main function of the condenser is to convert the high-temperature vapour refrigerant into a liquid refrigerant by heat rejection to the surroundings.

A throttling device is a very important component of the vapour compression refrigeration cycle. The expansion valve (figure shown above) and the capillary tube(figure is shown below) are the two commonly used throttling devices.

Read more in-depth about the Expansion valve. (link would open up in a new tab, so you can continue reading this article.) 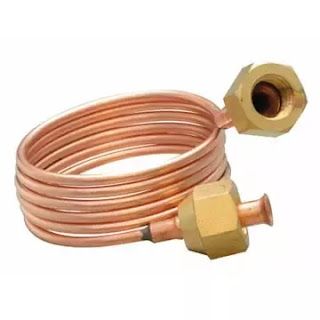 The cold mixture of vapour and liquid of the refrigerant is passed through another heat exchanger called the evaporator. The evaporator’s main function is to absorb the heat from the surroundings.

The working of the Vapour compression refrigeration cycle is as follows: 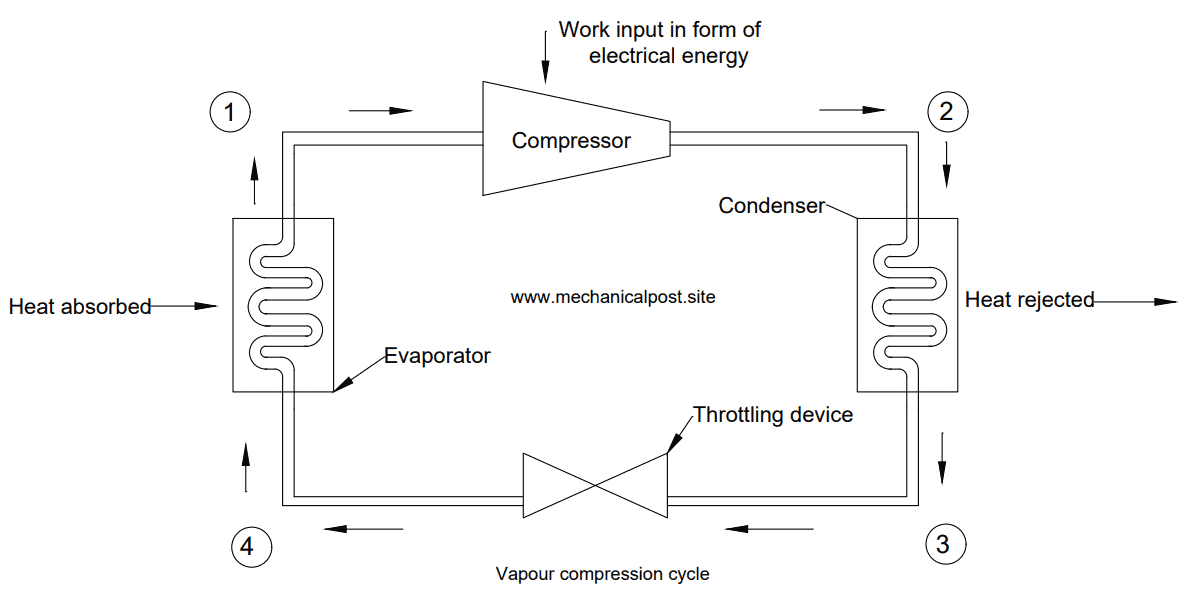 In this process, the vapour refrigerant is converted into liquid refrigerant by the condenser by heat rejection to the surrounding.
After conversion, the refrigerant is in the form of high-pressure liquid. This liquid still contains heat energy in it.

After condensation of the refrigerant, it is passed through the throttling device. If the throttling device is a capillary tube, its small internal diameter, opposes the flow of the liquid refrigerant. And when the expansion valve is used, the poppet valve poses as an obstruction to the flow.
Due to this obstruction, the liquid’s pressure drops. As a result, some amount of liquid starts to evaporate. The energy required for this phase change is taken from the heat energy present in the liquid itself.
As a result, the temperature of the whole mixture drops. This drop in temperature is quite noticeable.
Take for eg: if the inlet temperature is around 30 – 35 degree Celcius, then the outlet temperature will be around -20 degree celsius. (* these values are for understanding purpose, actual values might differ)

It is to be noted that the refrigerant when exits the throttling device, is in partial vapour and partial liquid state. This low pressure, low-temperature refrigerant mixture is then passed through the evaporator.
The evaporator is a type of heat exchanger. Since the cold mixtures flowing through the evaporator, it absorbs heat from the surrounding, thus, cooling the surrounding.
Now, this absorbed heat is then used to convert the partial liquid refrigerant into vapour. Since there is a change of phase (i.e. liquid to vapour), the overall temperature of the refrigerant remains the same.
This low-pressure vapour is then passed to the compressor, and the cycle begins once again.
This is how the vapour compression cycle works and refrigeration or cooling effect is produced.
Now let’s learn a little about refrigerants.

Coefficient of performance (C.O.P) of a refrigerator

Applications of the Vapour compression cycle

The following are the applications of the vapour compression cycle

Also, do click the subscribe button to get notified whenever we come up with a new article! (P.s it’s free!!) Today we’ll see What is Gas turbine power plant? Its types, construction, and working along with advantages and limitations

Today at The Mechanical post we”ll see about what is a LaMont Boiler? its construction, working, advantages, limitations and applications….

This is The Mechanical post and today you will be reading in this article about: What is a nuclear power…