This is The Mechanical post and today you will be reading in this article about:

What is a nuclear power plant?

What is meant by nuclear fission?

What are control rods, fuel rods, and moderators? 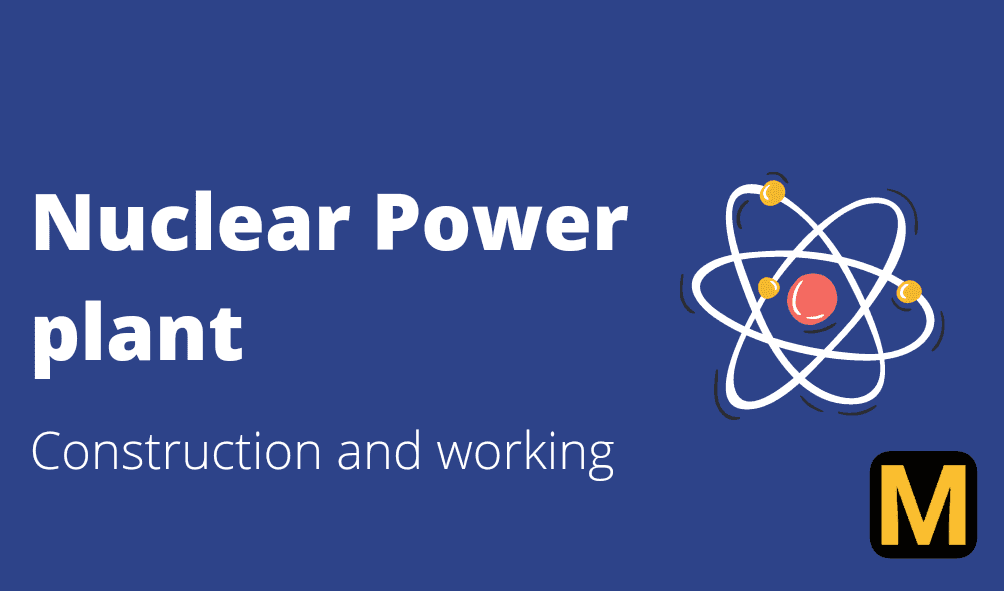 You can download your copy of the PDF on the Nuclear power plant at the end of the article.

What comes to your mind when you hear the term ” Nuclear power plant “? You probably might be thinking about something horrible.
But that’s not what you think. You would be surprised to know that Nuclear energy is the second-largest source of low carbon electricity with a share of 10% of the global electricity supply produced by 452 reactors around the globe.
– Source IEA (2019), Nuclear Power in a Clean Energy System, IEA, Paris

Nuclear power plants have a bunch of good things up their sleeve, like it does not produce greenhouse gases, has a very low carbon footprint, and many more…

What is a nuclear power plant?

A nuclear power plant is similar to a steam power plant except that in place of a boiler a nuclear reactor is used to generate steam.

Before starting off with the construction and working of the nuclear power plant, let’s understand the nuclear fission process which takes place in the nuclear reactor.

What is meant by nuclear fission?

Nuclear fission is the process in which a heavy nucleus like Uranium or Plutonium is split into lighter nuclei of approximately equal mass along with the release of a large amount of energy.

The Uranium 235 on itself is a stable atom, however, when hit with a neutron the Uranium 235 atom absorbs the neutron and becomes Uranium 236  which is unstable, and thus, it spontaneously splits into Krypton 92 and Barium 141.

This reaction results in the release of 3 neutrons along with a large amount of energy (i.e. 1MeV). These 3 neutrons further hit the other Uranium 235 atoms and the chain reaction goes on.

It is necessary that the chain reaction must be controlled or else an accident might occur. In nuclear a reactor control rods and moderators are present for a controlled reaction to take place.

So what are Fuel rods, control rods, and moderators?

Fuel rod – The fuel rod in the nuclear reactor is a tube made up of zirconium alloy within which small ceramic pellets of uranium oxide are placed. The fuel rods are placed inside the reactor core and submerged in the moderator.
Moderator –  A moderator is used to slow down the energy of the neutrons in the nuclear reactor which is produced by the fission process. Normal water or heavy water is used as a moderator and also acts as a coolant.
Control rod – Just as the name suggests, the control rods are used to control the fission reaction. The control rods absorb the excess neutrons present in the moderator and thus any further fission reaction is prevented. These rods are made up of Boron or Cadmium. The control rods and can be lowered or raised into the reactor accordingly to control the fission reaction.

A complete fission of 1 kg of Uranium is equivalent to 2.7 million kg of Coal
– source European Nuclear society (https://www.euronuclear.org/)

The following are the major components of nuclear power plant:

The nuclear reactor consists of the reactor core within which the fuel rods, control rods, and the moderator are present.

There are two basic types of nuclear reactors:

1. Boiling water reactor (BWR)  – In the BWR the feed water is allowed to boil in the reactor itself and is converted into steam. This steam is then directly passed through the steam turbine to produce electrical energy.

The BWR has a disadvantage which is that the water comes directly in contact with the fuel rods, thus there may be a possibility of the water carrying radioactive particles.

2. Pressurized water reactor (PWR) – In the PWR as the name suggests, the water in the reactor is pressurized so that it doesn’t convert into steam. This water is used to absorb the heat and deliver it to the feed water in a heat exchanger.

The feedwater is then converted into steam and sent to the turbine. In PWR there are 2 separate circuits as compared to the single circuit of the BWR. Since the coolant and the feed water do not mix there is no problem of radioactive particles in the feed water. The figure above shows the PWR nuclear power plant.

The heat from the working fluid is given up in the heat exchanger to the water which is to be converted into steam.

The steam turbine is used to convert the kinetic energy of the steam into rotational mechanical energy.

The steam from the turbine is sent to the condenser wherein the steam is cooled and converted into water.

The nuclear fission reaction of the heavy element Uranium (U 235) generates a large amount of heat inside the nuclear reactor.


This heat is then transferred to the coolant. The coolant is then passed through the heat exchanger where it gives up the heat to the feed water, resulting in the conversion of water into saturated steam.

Since the steam turbine is coupled to the alternator / generator the rotational energy of the turbine is converted into electrical energy.

The energy produced is then stepped up with the help of a transformer and then transmitted to the load centers.

The following are the advantages of nuclear power plant:

The following are the disadvantages of nuclear power plant:

Some FAQ regarding nuclear power plant

What is the difference between a steam power plant and a nuclear power plant?

The nuclear power plant works by using the heat generated during the fission reaction of the nuclear fuel in the nuclear reactor to convert the feed water into steam. This steam is then expanded in a steam turbine and with the help of an alternator, electrical energy is generated.

Which is the first Nuclear power plant in India?

The Tarapur Atomic Power Station (TAPS) located near Boisar in the Palghar district of Maharastra state was the first nuclear power plant of India.
– source NTI.org
𑁋𑁋𑁋𑁋𑁋𑁋𑁋𑁋𑁋𑁋𑁋𑁋𑁋𑁋
So that’s a brief on Nuclear power plant – its construction and working. Do let us know your thoughts on this topic in the comments.
Loved reading this article? Don’t forget to hit a like on our Facebook page @TheMechanicalpost and share this article with your fellow engineers (share links given below).
Till then keep learning and reading The Mechanical post! Today at The Mechanical post we”ll see about what is a LaMont Boiler? its construction, working, advantages, limitations and applications….