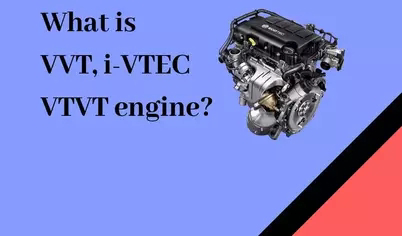 Today at The Mechanical post ! we’ll see about what is vvt engine, its working and advantages of using vvt. So let’s check out What is VVT, i-VTEC or VTVT engine ?

What is meant by vvt engine ?

VVT stands for Variable valve timing and is defined as “The mechanical process of advancing or delaying the time of opening and closing of inlet and outlet valves of the engine in order to increase the efficiency of the engine and many other benefits.”

The vvt technology was first patented by Fiat. But interestingly, Alfa romeo was the first one to bring vvt into mass production.
First let us know the full forms. Know that vvt engine, vtvt engine, cvt engine and i-vtec engines deal with variable valve timing but are different variations from different companies. Like VVT is a term used by Maruti Suzuki cars. So let’s check out What is VVT, i-VTEC or VTVT engine ?

Note: VVT technology is applicable to a 4 stroke engine only. This is because 2 stroke engines do not have valves, instead they have inlet and outlet ports for fuel injection and exhaust.
Read in detail:

The valves within an internal combustion engine are used to control the flow of the intake and exhaust gases into and out of the combustion chamber. The timing, duration and lift of these valve events has a significant impact on engine performance. Without variable valve timing or variable valve lift, the valve timing is the same for all engine speeds and conditions, therefore compromises are necessary. An engine equipped with a variable valve timing actuation system is freed from this constraint, allowing performance to be improved over the engine operating range.

Piston engines use valves which are driven by camshafts. The cams open the valves for a certain amount of time (duration) during each intake and exhaust cycle. The timing of the valve opening and closing, relative to the position of the crankshaft, is important. The camshaft is driven by the crankshaft through timing belts, gears or chains.

An engine requires large amount of air when at high speeds. However, the intake valves may close before enough air has entered each combustion chamber, reducing performance. On the other hand, if the camshaft keeps the valves open for longer periods of time, as with a racing cam, problems start to occur at the lower engine speeds. Opening the intake valve while the exhaust valve is still open may cause unburnt fuel to exit the engine, leading to lower engine performance and increased emissions.

Also read: What would happen if you would fill petrol in a diesel engine?

Types of variations in valve timings

Higher RPM – The main advantage of having a variable valve timing technology is the increase it will provide in your engine’s revolutions per minute. When you step on the accelerator, it will require more RPM to sustain this demand.That roaring sound you hear when you step on the gas pedal is the variable valve timing system hard at work to keep your engine running strong.
Better Fuel Economy – As the valves are controlled efficiently the fuel required will decrease considerably. Thus increasing the mileage of the car and reducing the stress on your pocket.
Lower Carbon Emissions – As some amount of exhaust gas is reused again in the combustion process, the emissions of the engine is reduced considerably.
Increased Engine Lifespan – If you continue to maintain an efficient and high performing engine, then you can expect to get a great number of years out of it. A lot of people will wait until their engines go bad before they decide to replace their vehicle. If you have variable valve timing in your engine, then it will help keep it strong for as long as possible. Of course, there are other factors involved in keeping an engine healthy too. Make sure you regularly get oil changes and use the right kind of fuel.

Have you ever wondered what is a V8 or an Overhead engine or a Supercharged or Turbocharged engine? Well, this…

The Mechanical post welcomes you back! Today we are going to see about the difference between the SI engine and…