There are a lot of sensors used in modern-day automobiles that help in the proper functioning of the vehicle, reducing emissions, increasing efficiency as well as improving the safety of the vehicle. Every sensor has a specific function and location assigned to it. The data from all the sensors is sent to the Engine Control Unit (ECU) which then interprets it and takes action accordingly such that the vehicle functions in an optimal manner.

So, today at The Mechanical post we’ll take a look at the Different types of sensors commonly found in automobiles along with each of their functions and location.

You can get your Free copy of the PDF on the Different types of sensors used in automobiles at the end of the article.

Following is the list of different types of sensors used in automobiles:

To determine the Mass flow rate of the air entering the I.C engine such that proper air-fuel ratio can be maintained.

The MAF sensor is situated between the air filter and the throttle body.

For what purpose is the Mass Airflow Sensor used?

The mass airflow sensor also commonly known as the MAF sensor is a type of sensor used in cars to calculate the amount of air that enters the I.C engine during the intake stroke.

The MAF sensor along with data from other sensors helps the ECU to determine how much fuel must be added by taking into account the amount of air available. This results in optimized operating conditions as well as helps in reducing pollution.

What is a Throttle position sensor?

When the driver presses the accelerator pedal it opens the throttle plate accordingly. So in order for the ECU to understand how much the driver has pressed the pedal, a throttle position sensor is used.

The throttle position sensor helps the ECU to control the amount of fuel in proportion to the air entering the cylinder and thereby varying the speed of the engine.

The Crankshaft position sensor is mounted to the engine block such that it faces the timing rotor which is mounted on the crankshaft.

What is a Crankshaft position sensor and why is it used?

The crankshaft position sensor plays a crucial role and helps the Engine Control Unit (ECU) understand data that is very important for the proper functioning of the engine. 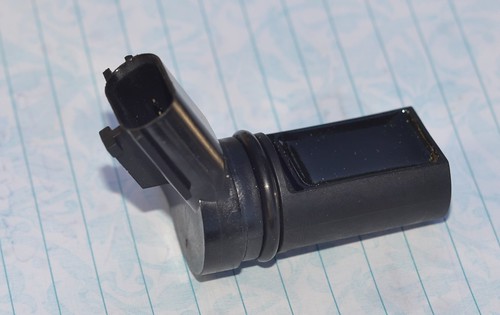 The function of the Camshaft position sensor is to measure the position of the camshaft at a given instant. This helps the ECU to better understand and adjust the fuel injection as well as ignition system timing.

The Camshaft position sensor is located near the cylinder head such that it is close to the camshaft.

What is a Camshaft position sensor?

The Camshaft position sensor can be used by the ECU to perform actions like cylinder selective knock control or sequential fuel injection.

The function of the Manifold absolute pressure sensor is to sense the pressure of the intake air and then accordingly decide the air-fuel proportions to be sent to the engine.

The Manifold Absolute Pressure sensor is located on the intake manifold of the engine.

What is a Manifold absolute pressure sensor?

The Manifold Absolute Pressure sensor or the MAP sensor is a device situated in the intake manifold and is used to calculate the pressure of air going to the engine. The higher the pressure, the higher will be the mass of air and hence more fuel can be used.

This sensor helps the ECU in determining the amount of air and fuel that has to be sent to the engine.

The function of the Knock sensor is to pick up the vibrations and sound coming from the engine and convert them into electrical signals.

The Knock sensor is attached directly to the outside of the engine block. However, in some instances, one can find the sensor beneath the intake manifold.

What is a Knock sensor and how does it work?

Thus to prevent knocking a knock sensor is used, which detects knocking in the engine and then converts it into electrical signals which are then sent to the Engine Control Unit (ECU). The ECU then processes the data and then decides whether to change the ignition timing or not.

The function of the Fuel Temperature sensor is to sense the temperature of the fuel and on that basis, the amount of fuel to be sent to the engine is decided.

The Fuel Temperature sensor is located in the fuel tank and is often part of the fuel pump assembly.

What is a Fuel temperature sensor?

The fuel density changes with a change in temperature. The higher the temperature, the lower will be the density and vice versa. A hot fuel means lower density and therefore more amount of fuel must be injected into the cylinder.

The Coolant Temperature sensor is usually located near the thermostat valve in the coolant passage.

What is a Coolant temperature sensor and why is it important?

The coolant temperature sensor helps the ECU understand whether the engine is running hotter or colder. Then accordingly the steps are taken by the ECU to maintain the temperature of the engine at an optimum temperature. This is important as a cold engine requires a different amount of fuel as compared to a hot engine.

The function of the Exhaust gas temperature is to measure the temperature of the hot exhaust gases that helps the ECU in regulating the air-fuel ratio.

The exhaust gas temperature or EGT sensor is located in the exhaust manifold.

What is an EGT sensor and why is it used?

Just as the name suggests, the EGT or the Exhaust Gas Temperature sensor is used to determine the temperature of the exhaust gas.

The EGT sensor is useful for the ECU to confirm that the proper air-fuel mixture is being sent to the engine. Changes in the air-fuel ratio can result in a change in the exhaust gas temperature hence it needs to be monitored by the EGT sensor.

The Oxygen sensor is used to measure the amount of oxygen present in the exhaust gas.

The Oxygen sensor is located between the engine and the catalytic converter in the exhaust manifold.

What is an Oxygen sensor?

So on the basis of the data obtained from the Oxygen sensor, the ECU decides the amount of fuel entering the cylinder and thereby compensates for the excess fuel or excess of air.

Do you know what is a Station wagon or a Cabriolet or a Hatchback? Check out our article on Different types of Car body styles.

As the name suggests, the vehicle speed sensor is used to measure the speed of the transmission output shaft or the vehicle wheel and send it to the ECU.

The vehicle speed sensor (VSS) is located near the transmission’s output shaft.

What is a Vehicle speed sensor (VSS) and what does it do?

The vehicle speed sensor helps the Engine control unit in a number of ways by telling the real-time speed of the vehicle. The data provided by the VSS is also used by driver assistance systems such as ABS, TCS, ESP or ACC, motor control units to determine the wheel speed.

So, that’s a brief on the different types of sensors found in cars. There are many more sensors used in an automobile, however, we have covered the most common and basic ones. Can you name some other sensors that you know of? Let us know in the comments, we are willing to hear from you.

Engines are the heart of conventional automobiles. The majority of automobiles work on either petrol or diesel. So What if you…