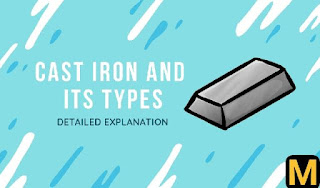 Cast iron may be defined as “an alloy of iron and carbon containing more than 2% carbon”.

The minimum carbon content in a cast iron is about 2% while the practical maximum carbon content is about 4.3%. In addition to carbon, cast iron contains other elements such as silicon, sulphur, phosphorous and manganese. Cast iron is a pig iron remelted and thereby refined, together with definite amount of limestone, steel scrap and damaged castings ( foundry returns ), in a cupola or other form of remelting furnace, and poured into suitable moulds of required shape.

Following are the types of cast iron:

White cast iron contains carbon in the form of cementite. This is obtained by rapid cooling. Due to absence of graphite, metal has white colour. It contains 1.75% to 2.3% carbon. The appearance of fractured surface is white.

This type of cast iron is obtained by allowing the molten metal to cool and solidify slowly. Grey cast iron contains 2.5 to 3.75% of carbon. The greater part of carbon is in the form os flakes. The microstructure of grey cast iron depends upon rate of cooling.

Because of the cast iron is supposed to be very hard, brittle, lacking in tensile and transverse strength and weak to withstand shocks it is alloyed with other metals to improve its properties. Amongst the alloying metals, nickel is predominating alloying constituent whose addition to the extent of 0.5 to 1.5% avoids the tendency of chilling or hard sports. Two typical e.g. of alloy cast iron are:
Acicular cast iron has nickel and molybdenum as the leading constituents and is employed for crankshaft. Spheroidal cast iron has a graphite content in spheroidal form, which is converted from flaky form by alloying with a small amount of magnesium and cesium. This change in graphite increases and the tensile strength and produces a tough metal which can undergo bending and twisting.

Used for manhole covers and pipes.

In this type of cast iron, the metal is treated with calcium sillicade. The trade name is ‘MECHANITE‘. Calcium sillicade acts as a graphister and produces as fine graphite structure, giving a cast iron of excellent mechanical properties. These properties are also due to careful control of melting the iron and also the moulding of the casting.
There are more than 26 types of machanite metals available at present. The board classification of these is:
All machanite irons have high strength, toughness, ductility and easy machinability. These irons are sort of a bridge between ordinary cast and steel. The casting weigh from 500 to 6000 kg. The metal is close grained.
Machanite irons responds well to heat treatments. It can be hardened wholly or on the surface. It can be toughened by suitable treatment. The metal is very well suitable for machine tool casting.

Gray cast iron, a type of cast iron most widely used for production of industrial components, has superior machinability to…

Welcome back to The Mechanical post ! Today let’s see what is rubber in detail.Rubber is one of the most…