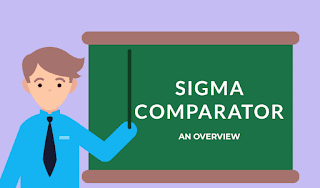 The sigma comparator is a mechanical comparator which is used to compare the roughness or flatness of a workpiece with a standard or an another workpiece.

A Sigma Comparator consists of the following components: (refer diagram given below)

It is the detecting unit that detects or senses any irregularity of the surface. This segment of the comparator is straightforwardly in contact with the surface.

The plunger is able to slide vertically (up & down) when pressure is applied at its tip.

For the most part, a diaphragm is made of elastic type material (polymer), in Sigma comparator there are 2 cuts that the diaphragm is given to have frictionless movement of the plunger.

It is a knife edged metallic strip, which is fitted with the plunger with the help of screws as shown in the figure.

Moving square is a moving arm or part which is straightforwardly associated with the blade edge part, and it is a base piece of Cross Strip.

The moving block is capable of rotating or turning around its upper left-hand corner.

As the name suggests it is a fixed member attached to the cross strip.

The cross strip hinge is the pivoted portion that helps the moving block to rotate.

It is a basic Y shaped arm intended to connect the driving drum via the phosphor bronze strip and the moving block as shown in the figure below.

This arm is made of Phosphor Bronze alloy as it has desirable properties like corrosion resistance, spring qualities, resistance to fatigue etc.

It is a small cylindrical shaped member that rotates clockwise as well as anticlockwise. The phosphor bronze strip movement drives the drum.

The pointer is mounted upon the same spindle as that of the driving drum. So as the drum rotates the pointer also rotates.

A pointer is used to display the reading of the measurement.

The scale and the pointer display the output of the measurement. The scale is marked accordingly with proper units. The scale may be circular or linear.

The working of a Sigma Comparator is expressed underneath:

Sigma comparator is a kind of mechanical comparator invented by the Sigma Instrument Company, based in the USA.

There are 2 ways in which magnification can be obtained in the sigma comparator.

The main magnification is calculated as the effective length of the Y arm (L) to the distance between the hinge pivot and the knife edge (x).

The second stage of magnification is achieved by the length of the pointer (R) to the radius of the driving drum (r).

Here are a few advantages of Sigma Comparator:

Here are a few limitations or disadvantages of Sigma Comparator:

From which category sigma comparator belongs?

The sigma comparator belongs to the category of “mechanical comparator”.

What is sigma comparator used for?

Sigma comparator is used to compare the flatness or roughness of a standard component with the specimen.
𑁋𑁋𑁋𑁋𑁋𑁋𑁋𑁋𑁋𑁋𑁋

Also, share this post with friends and family with the social links provided below.
Till then keep learning! Parkinson’s gear tester is a testing device used to measure the variation in the center distance of two gears in mesh.

The Vernier Caliper most popular measuring instrument widely used in manufacturing industries, workshops, or metrology labs. This is The Mechanical…

Tools are the extension of a worker’s hand which helps improve the ability to improve or modify other things. So… Today at The Mechanical post we’ll discuss What is a slip gauge? the different grades of slip gauges, the wringing… The tool a mechanical engineer comes across almost every day is the Micrometer screw gauge along with the Vernier caliper….