This is The Mechanical post and today you would be reading about What is gear? and terminology of gears.

Get your copy of the PDF on gear terminology at the end of this article. 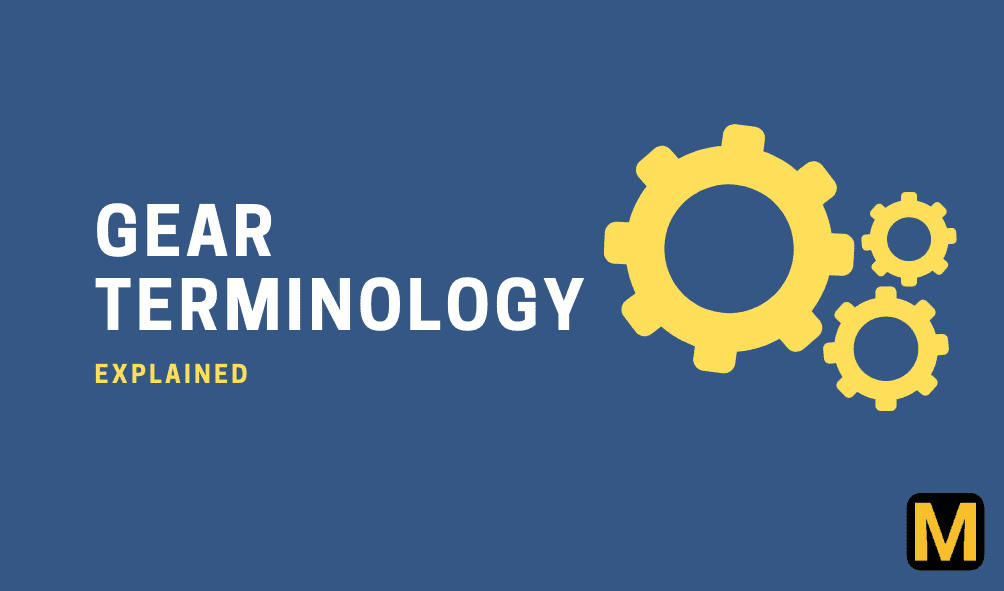 A gear is a cylindrical or conical-shaped machine element having teeth cut on its periphery which meshes with another toothed part to transmit torque and rotary motion.

Gears are used widely for power transmission as they have a positive drive and the capability of transferring an exact velocity ratio.

They are also a highly efficient mode of power transmission when compared to belt, chain, or rope drive.

Gears were invented by the Greeks in the third century.

The following are the important terms used for gears:

A Pitch circle is an imaginary circle that will contact the pitch circle of another gear when in a mesh.

Pich point is the point of contact of the pitch circles of gears in mesh.

The part of the tooth below the pitch circle is called the flank.

The profile is the curve formed by the face and the flank of the tooth. In short, it is the shape of the tooth. Cycloidal and involute are the two main types of gear profile.

The Face width is the width of the tooth when measured parallel to the axis of the gear.

The topmost part of the tooth is known as the top land.

The distance or space between two adjacent gear teeth when measured along the pitch circle is known as the tooth space.

The distance from one point on one tooth to the same point on the adjacent tooth, when measured along the pitch circle, is known as circular pitch.

The circle drawn such that it passes through the top of the teeth and is concentric with the pitch circle is called the addendum circle.

The radial distance between the addendum circle and the pitch circle is known as  Addendum.

The circle drawn such that it passes through the bottom of the teeth of the gear and is concentric with the pitch circle is known as the Dedenddum circle.

The radial distance between the dedendum and the pitch circle is known as Dedendum.

Module is defined as the ratio of pitch circle diameter (D) to the number of teeth (N).
Mathematically,    m = D / N

Backlash is the difference between tooth space and tooth thickness when the distance is measured along the pitch circle.
Backlash in a gear helps prevent jamming of the gear. It also acts as clearance for thermal expansion and allows a thin film of lubricating oil. Manufacturing errors in gear also lead to the formation of backlash between the gear.

What is a module in gear?

A module in gear is the ratio of the pitch circle diameter of gear to the number of teeth on the same gear.

What is gear terminology?

Gear terminology are the terms related to a gear that helps in the design of it and describes the shape and size of gear.

What is an addendum and dedendum?

An addendum is the radial distance between the pitch circle and the addendum circle whereas the distance from the pitch circle to the dedendum circle is the dedendum.
╌╌╌╌╌╌╌╌╌╌
So here we come to the end of the article. Loved reading it? Do let us know as well as do share it with fellow engineers.
And we are on Facebook @themechanicalpost do check us out!
Till then Keep learning and reading The Mechanical post. Gears are widely used transmission devices and are available in different shapes and sizes. You may recognize some, but do…

CAD stands for Computer aided drafting. Previously all engineering drawings were drawn by hand. This took a lot of time… As Mechanical engineers, screws are a day-to-day part of our lives, we are surrounded by screws, and hence it is…

Product designer, Industrial designers all would agree that designing a machine is the first and the most crucial stage of…

“Design engineer require special software and tools for research and development of new products. These software helps the engineers to…